GENERAL APPEARANCE AND CHARACTER
The Sharplaninac is a robust, well proportioned dog with plenty of bone, of a size that is well above the average and with a thick, long, rather coarse coat that emphasizes the short coupled appearance. Of sturdy constitution, even disposition, good temperament, reliable, protective but not snappy; incorruptible and devoted to its master. Height: The average height at the withers is 62 cm for males and 58 cm for bitches. Males under 56 cm and bitches under 54 cm are not eligible for breeding. Weight: Dogs from 35-45 kg; bitches from 30-40 kg. Length of body: The length of the body is slightly longer than its height at the withers; the relation is about 8 : 10 for dogs, 10 : 12 for bitches.
The head is proportioned to the body. Its total length measures approximately 25 cm which corresponds to about 40% of the height at the withers. The skull is slightly longer than the muzzle (the relation being 57 : 43%). The skull has a slightly convex topline; the nasal bone is straight. The lines of the two profiles are converging. Skull (upper head) : Is broad with a well marked groove. Seen in profile as well as from above, the skull should appear slightly convex and a little rounded. The eyebrows are only slightly marked. The occiput is invisible. Stop: Slight.

Muzzle: Is shorter than the skull, broad and deep at the root, slightly tapering towards the nose. The nasal bone is straight and broad. The underjaw, as seen in profile, starts with a bend and then proceeds in a straight line diverging from the profile of the nasal bone. Nose: Broad and black. Lips: Moderately thick and tight; the upper lip is only slightly overhanging over the under lip. The corners of the lips are clean without even a hint of a flew. Teeth: Scissor bite; full dentition. Eyes: Almond shaped, neither large nor deep set, dark or light brown in colour, with a quiet but piercing gaze that should never show fear. The lids and the visible connective tissues should be black. Ears: Are set on a line running from the tip of the nose through the inner corner of the eye or slightly underneath. They are V-shaped and dropping, hanging close to the cheeks, and covered with short, dense hair. 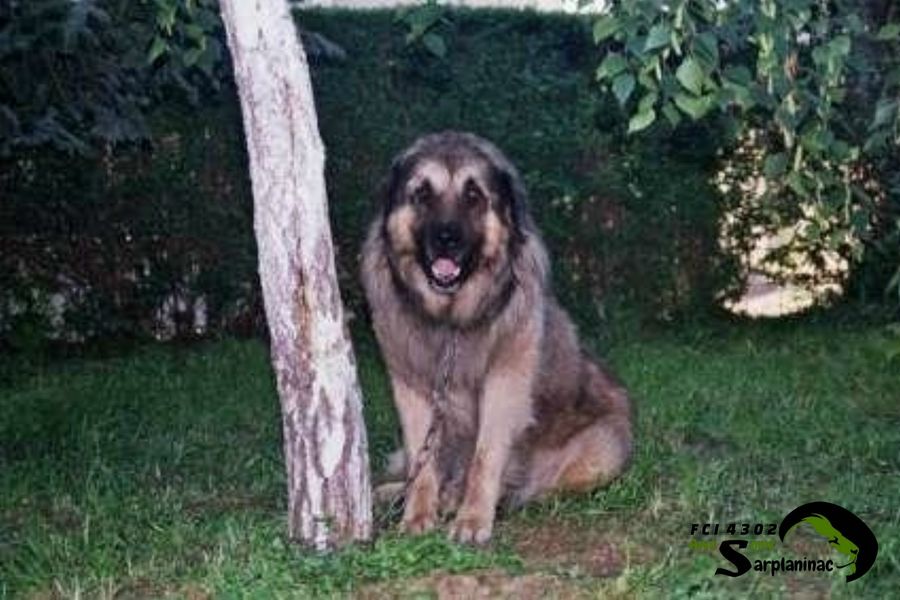 BODY
General appearance: The topline is horizontal or slightly sloping towards the croup. Dogs bred in the mountains may be allowed a croup that is lying slightly higher than the withers but this is not a desirable feature. The total length of the body exceeds slightly the height at the withers. Withers: Are moderately developed and broad. The connexion with the neck is powerful and the passage hardly noticeable. Back: Is straight and broad, not too long. The loin is shorter, broad and muscular. Croup: Of medium length, sloping and well muscled. Chest: Is deep, the brisket reaching to the elbows, of medium length, with slightly sprung ribs. The forechest is broad and muscular. The girth of the ribcage should exceed the height at the withers by at least 20%. Belly: Is tucked up and muscled. The lower profile is gently rising from the front to the rear. The flanks are rather short and with a pronounced groove.

NECK
The crest is either slightly convex or straight. The throatline is straight. The neck is of medium length but because of the length and thickness of the coat it looks shorter than it really is. Broad, deep and muscled, it is merging smoothly into the head and the shoulders. To be carried slightly above the line of the back. The skin is tight and without dewlaps. The coat is dense, long and coarse with a marked frill at the junction of head and neck (nape); this particularity is inbroadening the width and depth of this body part.

TAIL
The tail is long and reaching at least the hock joint. The topline of the croup is sloping gradually and evenly into the tail. Strong at the root, tapering to the tip, with feathering along the lower side. Carried in a slight curve like a sabre; when the dog is excited, the curve is accentuated and the tail may be lifted above the line of the back. 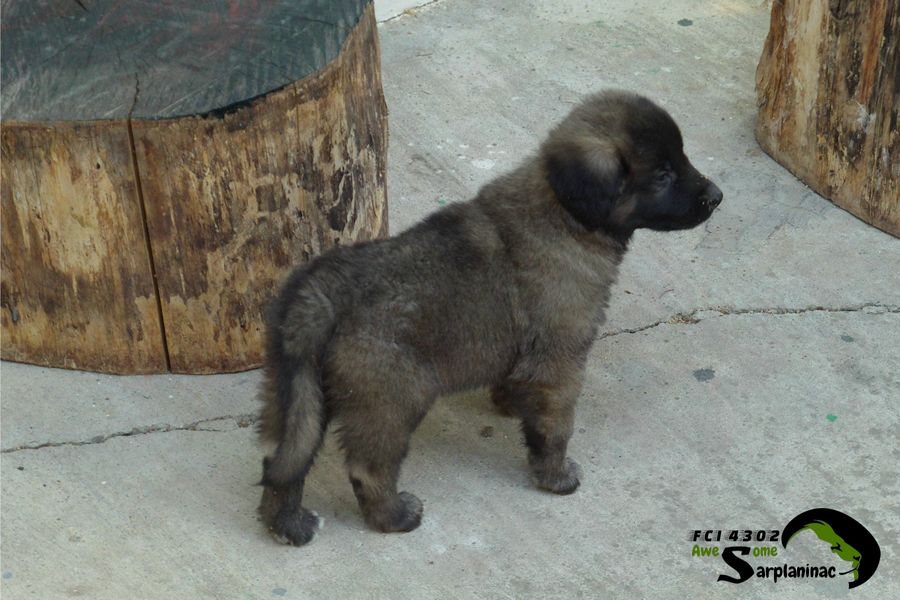 LIMBS
FOREQUARTERS: General appearance : The front legs are straight and well proportioned to the body. The elbows are at about 55% of the total height at the withers. The different parts of the forequarters are well proportioned to each other and to the body. The shoulders are fairly long and broad, flat, sloping and forming an angle of 65° with a horizontal line. The upper arm (humerus) is more obliquely set than the shoulder blade, the angle with the horizontal line being of 55°. It joins the forearm at an angle of 145°. The elbow joint is broad, neither out-nor inturned and placed only very slightly off from the ribcage. The forearm is straight, long, with plenty of bone and well developed muscles and feathering along the rear side. The pasterns are broad and strong, slightly slanting. The feet are firm, oval shaped with well arched and closed toes. Nails strong and black. Soles tough but elastic, black.

HINDQUARTERS: Viewed from behind the legs appear to stand evenly, slightly wider apart than the forelegs. Seen from the side, they also appear of even construction and fairly well angulated. The upper thigh is well muscled, rounded, obliquely placed, the angle with a horizontal line being similar to that of the shoulder. The stifle (joint between the upper and the lower thigh) is slightly less angulated than the scapula-humerus joint (about 125°). The stifle is strong and broad. The second thigh is also obliquely placed, strong, with long muscles and very bushy feathering. The hock is broad and displays a rather open angle (about 130°). The metatarsus should be less slanting than the pastern. Dewclaws are rare and should be removed.

GAIT: The stride is long and elastic. The most usual gait is the trot with a high and moderately outreaching action. At a gallop the dog appears to be somewhat clumsy but the jumps are long and covering plenty of ground. SKIN is moderately thick, elastic and tight all over the body. No dewlaps. All the visible mucous membranes are black or deeply pigmented. HAIR: The head, ears and front side of the legs are covered with short hair. Around the neck, on the rump, at the rear side of the legs and on the tail the hair is long, almost flat and somewhat coarse. Under the guard hair the abundant undercoat is short, dense and of fine texture. At the withers the hair should measure between 10 and 12 cm; it should not be shorter than 7 cm. 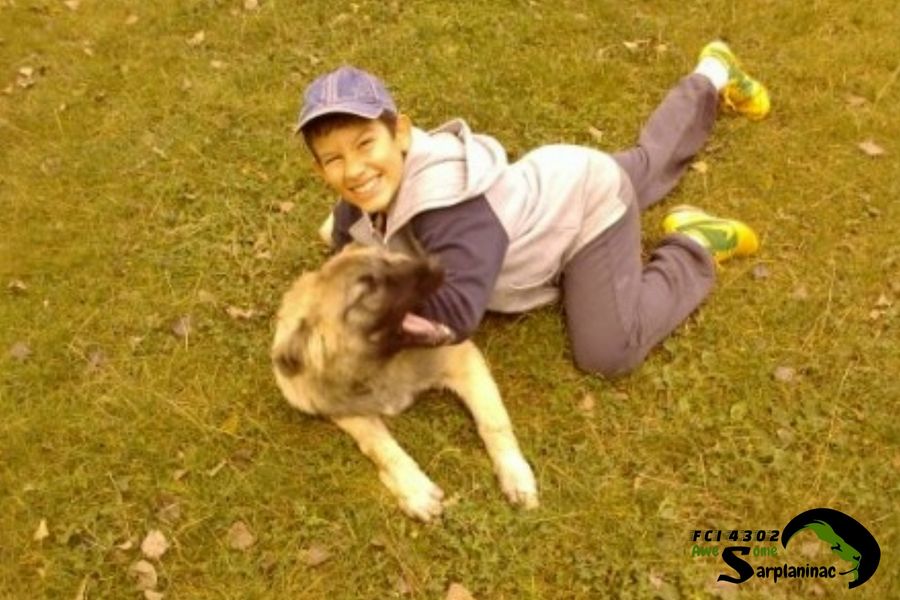 COLOUR: The Sharplanina is a solid coloured dog. All colours are acceptable from white to dark brown that looks almost black. The preferred shade is a greenish grey (iron grey) and dark grey. Spotting and white markings are not allowed. Pigmented dogs may show tiny white markings at the chest and toes but they are undesirable. The upper part of the head, the neck and the body is of a darker hue that fades out into a dirty white or a yellowish grey toward the extremities. The change must be very gradual and by no means give the impression of a spotted pattern of actually create a spotted coat.

FAULTS
Any departure from the foregoing points should be considered a fault and the seriousness with which the fault should be regarded should be in exact proportion to its degree.

• Insufficiently broad skull.
• Muzzle too long.
• Jaws too heavy.
• Chest lacking in width and depth.
• Flatsidedness or exaggeratedly sprung ribs.
• Any slight deviation of the limbs from the correct position.
• Coat slightly shorter than desired as long as the feathering is alright.
• White markings on chest and feet.
• Tail slightly too short.
• Hare-feet and other minor physical blemishes.
• A striking disproportion between the length of the body and the height at the withers.
• Hair shorter than 7 cm.
• Extended white markings (spotting) and brindle pattern.
• Unpigmented visible mucous membranes and eyes.

• Muzzle too long or snipy.
• Ears set too high or standing off
• Pincer (level) bite.
• Swayback.
• Tail carried with a side bend.
• Lympathic constitution and other severe physical faults.