On 17/08/2014 there was a national dog show “CAC Negotin 2014“. Tyson has achieved excellent results, although the day before had another dog show.

We can safely say that our dog suffered a big injustice in Batocina.

The judge awarded our dog R.CAC. The reason he gave that dog does not have the typical head for breed. His decision was not substantiated with facts.

We were left without an explanation. If the dog does not have the typical head for breed then it should be disqualified!

In evaluating our dog is not allowed to make one round in the ring while the other dogs had a right to. This was also the biggest mistake.

In Negotin day later Tyson won the excellent, CAC and BOB. So Tyson for a short time at very high temperatures crossed 497 km. In the text below you can see photos and video of dog show as well as a short description of Negotin. 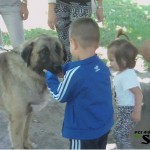 Negotin is a town and municipality in the Bor District of north-eastern Central Serbia. It is situated near the borders between Serbia, Romania and Bulgaria.

It is the judicial center of the Bor District. The population of the town is 16,716 while municipality has 36,879.

The population of the villages around Negotin are mostly supported by the family members who are guest workers in the countries of western Europe.

Agriculture is a side activity more than an income-generating one. The largest employer in this municipality is the chemical industry Prahovo.

The Negotin museum is home to many archaeological findings, from Roman times to the more recent World War II era.

The Negotin municipality is home to many galleries, monuments, churches and monasteries, and archaeological sites.

The nearby Iron Gates national park offers breathtaking views, excellent hunting grounds, and many trails for hiking (most trails are not well marked or maintained, so hiking is recommended only for the experienced). Source: Wikipedia