He achieved good results alongside bad trial by cynological judge Mr. Milovan Protic. In fact, we concluded that judge does not know enough sarplaninac breed.

Ben didn’t make a single circle within the ring. The judge claims that the dog is too black! We thought it was a joke.

But when he said that Ben doesn’t have so typical head for breed, we realized what time is it. Therefore it is necessary a description  of Ben by breeder and cynological judges where the dog is presented!

A snout is shorter than forehead’s part. A nasal bone is straight without humpback. The eyes are dark chestnut. Head is proportional to the body.

A gentle forehead, the ears insert in semmetrical form like a capital V. Back positiong of legs are regular, broader than front legs. A tail is long under the ankle, raised, bended in an arc and ornated.


Ben is for sale. 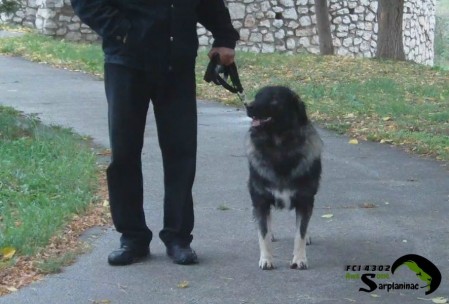 Cuprija is a town and administrative district in Serbia. The population of the town is 19,380, while municipality has 30,020 inhabitants.

Cuprija lies on international road and railway links 150 kilometres (93 miles) south of Belgrade and 90 km (56 mi) north of Nis. The main source of income is the College of Nursing and Agriculture. Ravanica Monastery, built in 1381 by Lazar of Serbia, is 8 km (5 mi) to the east. Source: Wikipedia

1. Nikolic Ljubisa I FCI and rottweiler